For Kyle O’Grady, it was feeling good enough to get out of his wheelchair much of the time. For Olivia Bowie, it was bonding with a roommate and new friends who understand what dealing with cancer as a teenager feels like – because they are going through it, too.

While meeting members of the Boston Red Sox and watching them in action during a spring training game were certainly highlights of the March 27-29 Jimmy Fund Clinic trip to Fort Myers, Florida, it was the less-heralded moments that often stood out to the 45 teenage patients and 24 chaperones who headed south.

“Seeing the Red Sox was a blast, but my favorite part was being away from my parents and trusting myself to do the right things while on my own,” says O’Grady, 13, who is undergoing brain cancer treatment at Dana-Farber. “I went to overnight camp the last several summers before I got sick last year, and this gave me the confidence I can go back.”

Gaining confidence and new friends is a major focus of the spring training trip, which was started 13 years ago and gives teens an opportunity to enjoy themselves with no hospitals or parents in sight. The annual trip is made possible by the generosity of JetBlue and of Jimmy Fund Golf’s tournament Tame The Tigers presented by Amica Mutual Insurance Company.

The chaperone crew includes seven doctors and 11 nurses to handle medications and other needs, but these caregivers are also among those swimming with kids at the hotel and pitching batting practice in the girls vs. boys baseball game.

“It was great to see everybody just having fun and not worrying about cancer,” says Bowie, a 19-year-old who left college last semester after being diagnosed with a sarcoma in her leg. “Because I was older than a lot of the kids, I was kind of like a big sister to them. That felt great.”

The baseball perks teens enjoyed during the weekend included posing for photos with Red Sox stars like Dustin Pedroia and Clay Buchholz and playing ball on the big-league diamond at JetBlue Park at Fenway South. Adolescent Specialist Jen Noonan did a double-take when she first noticed that O’Grady wasn’t in his wheelchair during the boys vs. girls game, and then saw him out at shortstop.

“He had the biggest smile on his face,” says Noonan. “That’s what the weekend is all about, bringing these kids together in a way we can’t duplicate in the clinic and seeing them do things they haven’t been able to do in a long time.”

Parents back home were able to keep tabs on sons and daughters through a blog where photos were continually posted, but they knew it was important that they be out of the picture.

“She and I have been very attached since her diagnosis, but that’s not always healthy for a teenager,” says Mary Bowie, Olivia’s mother. “I was so happy to see her doing what kids her age are supposed to be doing, hanging out with other kids. When I picked her up on Sunday, she was texting her new friends the whole drive home.”

It was what came before the drive home that most delighted O’Grady’s mother, Abbie. When the bus carrying the clinic group back from Logan Airport arrived at the Yawkey Center, Kyle got off, walked all the way over to Abbie on his own, and then gave her a huge bear hug.

“That was a big goal for him, to get strong enough to hug me like that,” Abbie O’Grady says. “It was the best thing that has happened to me in a year.” 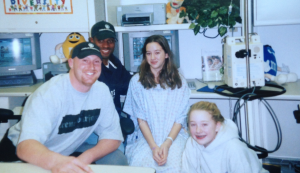 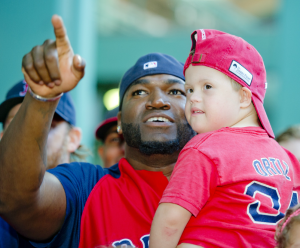 Big Papi is a big hit for the Jimmy Fund 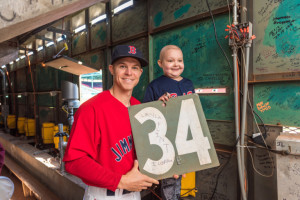