In preparation for his first day of kindergarten, young Michael Sweetman visited his primary care physician. What they anticipated to be a routine checkup left Michael’s parents with more questions than answers. The very next day, the Sweetman’s visited Dana-Farber/Boston Children’s Cancer and Blood Disorder Center, where they learned Michael was suffering from acute lymphoblastic leukemia (ALL).

For the next two years, Michael and his family would come to call Dana-Farber their second home, making routine trips from Norfolk, Massachusetts to Dana-Farber’s Jimmy Fund Clinic for treatments.

During a visit to the hospital, Michael met 6-year-old Jake Maguire who was receiving treatment for pre-B acute lymphoblastic leukemia at Dana-Farber. Through conversation the boys and their families discovered they lived close to one another and shared a love for baseball. The two became instant friends.

For Michael and Jake’s parents the friendship took on a different meaning.

“No one can really understand what Michael and Jake went through and I think it bonds them in a unique way,” said Jake’s mother, Kim Maguire. “It is the same for us parents. The doctors and staff at the Jimmy Fund Clinic mean so much to us. They provided a place that Jake could still be a kid and have fun while providing the lifesaving treatments he needed. Their support was amazing, but Michael and the Sweetman family provided a different type of support that we will never forget.”

The two families also developed sincere bonds with the members of the Jimmy Fund Clinic staff.

“It is hard to put into words just how much Dana-Farber means to us as a family. When Michael no longer needed to visit the Clinic on a weekly basis, our daughter, Samantha, was disappointed,” said Brian. “Like all of us, she felt at home there.”

Michael and Jake both finished treatment in 2008. The following spring, Jake began experience headaches and was complaining about problems with his vision. Doctors at Dana-Farber discovered he had relapsed and he was immediately put back on treatment.

“We formed close bonds with so many of the doctors, nurses, and staff that when Jake relapsed, it was like returning to a family that holds you up during the worst of times,” explains Kim.

Throughout Jake’s relapse and even today the families remain friends. A couple of times a year Jake, Michael and their families try to get together to have dinner, celebrate their health, and catch up.

“We recently ran into Michael and his family at one of Jake’s baseball games,” said Kim. “It was a pleasant surprise to see them playing against each other!”

“Whenever the boys see each other they have an unsaid understanding,” said Brian. “But that doesn’t mean Michael will go easy on Jake next time they see each other on the baseball field!”

In May, Jake celebrated being in remission for 6 years. This coming October, Michael will also be celebrating his remission; 6 years from the day he finished treatment. 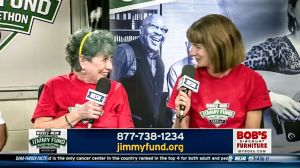