When Gary Dawkins’ wife, Marie, was diagnosed with breast cancer, he found support through friends and a caring workplace. Later, he was connected with a colleague, Emily Lee, whose husband was being treated for an aggressive form of sarcoma. Suddenly, the two acquaintances were thrown into the same personal experience and looked to each other for support.

“People can say they know how you feel, but they really can’t understand until they walk down the same street. Emily and I were suddenly going through it together,” said Gary.

Emily is originally from Hong Kong and did not have any family nearby beyond her husband and two children. Friends and co-workers sprang into action to help her, including Gary, who was also tending to his wife, raising his son, and working full-time.

“My husband, Cheun, became very sick, very quickly, and was discouraged. Marie, who was also going through treatment, spent time talking to him and encouraged him to continue with what his doctors recommended,” said Emily. “Gary would also stop at my house on his way home at night and help Cheun move upstairs, because I couldn’t move him myself.”

In 2008, Cheun and Marie passed away from cancer within three months of each other. Gary and Emily lost touch for a while as they guided themselves and their children into a new normal.

They later reconnected through mutual friends.

“We were always friends, and shared very random things in common. We lived in the same town, and both came from other countries [Gary is from Jamaica],” said Emily. They had also stood alongside each other through the devastating experience of tending to, and losing, a loved one.

Emily puts it simply: “We just ended up falling in love. I would say we were destined to be together.”

Emily and Gary found renewed joy in their life together—being with their families and traveling everywhere from Hawaii to Jamaica. Five years ago, they started GEM (Gary + EMily) to walk the Boston Marathon® Jimmy Fund Walk presented by Hyundai together as a team in remembrance of their spouses.

“We wanted to work together to find a cure for cancer,” said Emily.

Their yearly tradition of walking the Half Marathon route brings back a flood of memories for Emily and Gary, and they are emboldened by the crowd surrounding them.

“It is great to see many people walking,” said Emily. “Everyone has an experience to share and as a walker it feels so good.” When they reach the finish line, however, they are emotionally and physically exhausted, and ready to go home—together.

Today, GEM has grown to not only include new friends, family, and colleagues, and to honor other loved ones lost, including Gary’s close childhood friend, Berris Burke, who passed away from cancer last year.

GEM is one of the many teams that will walk the iconic Boston Marathon® course on Sunday, September 25 to help Dana-Farber continue to revolutionize the fight against cancer. Over the years, the team has raised more than $29,000 to support Dana-Farber Cancer Institute. Learn more about the Boston Marathon® Jimmy Fund Walk and the Jimmy Fund’s mission to conquer cancer and support families like Emily and Gary’s. 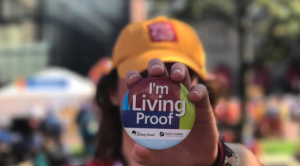 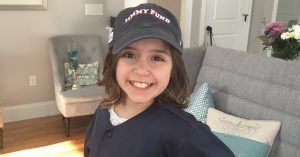 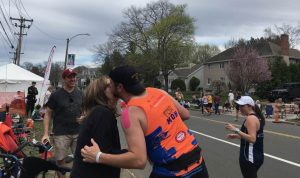