Like most photographers, I am used to this. Sometimes, walking backwards and shooting is the only way to get your shot.

Today, the shot is of Brock Holt and seven-year-old Jimmy Fund Clinic patient, Layla. Brock is going to show her the Green Monster and I want photos of them as they make their way across the field. It’s somewhat of an impromptu shoot. Earlier I had been photographing Jimmy Fund Co-Captains Brock Holt and Pablo Sandoval with Layla and an adult patient in the Fenway concourse and on the first base line. Holt and Sandoval are ambassadors for the Jimmy Fund and raise awareness and build support for cancer care and research for adults and children at Dana-Farber Cancer Institute. We were wrapping up after that shoot and the players were autographing hats. Out of the blue, Brock Holt asked Layla if she wanted to see the Green Monster.

Of course she said yes.

Brock takes Layla by the hand and they make their way across the field. You can see the excitement in her face as they get closer to the wall. I can’t hear what they are saying but it’s easy to see that Layla is mesmerized by Brock. We get to the Green Monster; it’s huge and full of dents. As I get closer, I hear Brock explaining that the wall is pretty hard and it hurts when you hit it. He knows, he continues, because during the game the night before he did just that.

Brock wrestles with the little door built into the wall and it swings open to reveal a dark emptiness. We follow him in to the sacred baseball place that is behind the Green Monster. The intimate tour continues and I do my best to document the event without disturbing the priceless moment. Photographing inside the Green Monster is like photographing in a cave. There is essentially no light so I quickly readjust my flash and camera. When my eyes get accustomed to the low light I can see signatures everywhere. Brock finds Layla a pen and she adds her name to the wall, alongside Red Sox greats like Manny Ramirez and Jim Rice.

Brock rummages through a pile of metal player numbers and produces the number 34 (David Ortiz). She prints her name right across the number and looks up at me with a satisfied smile.

Her private all-star-led Green Monster tour complete, Brock takes her hand and leads her back to the dugout where a special seven-year-old is left with some very special memories. 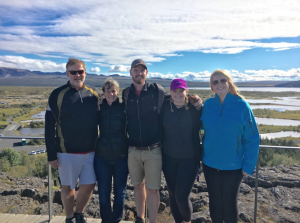