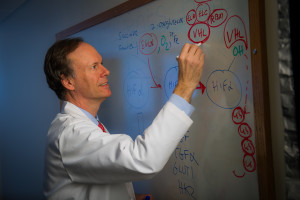 Dana-Farber physician-scientist William G. Kaelin, MD, has been named a winner of the 2016 Lasker Award along with two other scientists for groundbreaking basic research on how the body senses and adapts to changes in oxygen availability.

The honor, which is bestowed by the Albert and Mary Lasker Foundation, is the most prestigious U.S. award for biomedical science and one of the most significant in the world. Eighty-seven Lasker laureates have received the Nobel Prize, including 41 in the last three decades.

Kaelin, will share the award with Peter J. Ratcliffe of the University of Oxford/Francis Crick Institute and Gregg L. Semenza of Johns Hopkins University School of Medicine, was cited for the discovery of the pathway by which cells from humans and most animals sense and adapt to changes in oxygen availability – a process essential for survival.

The American Society of Clinical Oncology selected Kaelin earlier this year for the 2016 Science of Oncology Award and Lecture.

Kaelin’s research explores why mutations in genes known as tumor-suppressor genes can lead to cancer. His study of a tumor-suppressor gene called VHL provided key insights into the body’s response to changes in oxygen levels – enabling, for example, an individual to adapt to high altitudes where the air contains less oxygen. His work on the VHL protein was instrumental for the subsequent successful development of VEGF inhibitors to treat kidney cancer.

He discovered that VHL helps control the levels of a protein known as HIF, which ratchets up or down the body’s response to low oxygen, such as the production of red blood cells and new blood vessels. His subsequent discovery of a molecular switch that renders HIF oxygen-sensitive was critical to the understanding of how cells react to variations in oxygen level.

“The work of this year’s honorees epitomizes the power and impact of dedication to rigorous and innovative medical research,” says Claire Pomeroy, president of the Lasker Foundation. “These outstanding advances have illuminated fundamental aspects of life, developed a treatment for a deadly disease, and raised public engagement with science.”

“I am thrilled and very grateful to receive this recognition,” says Kaelin. “It is a tribute to the many talented trainees and colleagues I have been lucky enough to work with over the years and a reaffirmation of the importance of basic, mechanistic research at a time when young scientists feel increasing pressure to do applied research.”

“The 2016 Lasker winners combined exceptional insight, creativity, and perseverance in pursuing crucial questions in medical science,” according to Joseph L. Goldstein, of the University of Texas Southwestern Medical Center, and chair of the Lasker Medical Research Awards Jury. “This year’s Basic Award laureates have deepened our understanding of the fundamental pathways by which we sense and respond to the presence of oxygen.”

For 71 years, the Lasker Awards, America’s most prestigious biomedical research awards, have recognized the contributions of scientists, clinicians, and public citizens who have made major advances in the understanding, diagnosis, treatment, cure, or prevention of human disease.

Recipients of the Lasker Medical Research Awards are selected by a distinguished international jury. More details on the Lasker Award recipients, the full citations for each award category, video interviews and photos of the awardees, and additional information on the Foundation are available at www.laskerfoundation.org. 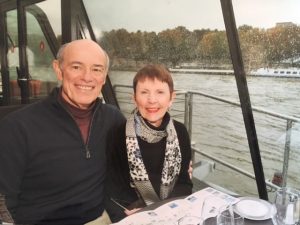 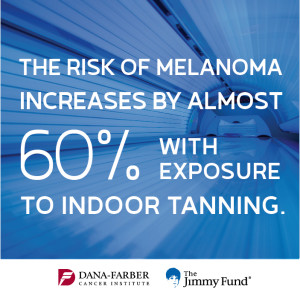