Dana-Farber Cancer Institute’s expert care and research not only saved Esther Zaff’s life almost a decade ago—they also make possible her healthy, active life as a mother of two today. To honor that fact and ensure that Dana-Farber’s lifesaving research continues into the future, Esther and her husband, Jon, made a gift to Dana-Farber and the Jimmy Fund in their will.

In 2007, Esther, Jon, and their 3-year-old daughter, Gabriella, came to Boston from Washington, DC, because Esther was in dire need of a stem cell transplant. She had undergone years of treatment for the blood disease aplastic anemia, and for an extremely rare genetic condition, dyskeratosis congenita (DKC), that causes bone marrow failure. Because of her DKC, traditional aplastic anemia therapies stopped working for Esther. She was referred to Joseph Antin, MD, chief of Stem Cell Transplantation at Dana-Farber.

“Dr. Antin had not only heard of DKC, he had treated patients with it. This was not the case at other transplant centers we considered,” Esther said.

Dr. Antin’s expertise, compassionate care, and the kindness of everyone at Dana-Farber immediately reassured the family that they were in the right place.

“We really have a special love for everyone at Dana-Farber because of their commitment to total excellence in every area,” Esther said.

Esther spent a year at home in isolation after her transplant, and continues to receive ongoing treatment for graft versus host disease (GVHD) at Dana-Farber’s Kraft Family Blood Donor Center. After Esther’s recovery, she and Jon welcomed their second daughter, Eliana.

“Dana-Farber is the reason we are here as a family,” Esther said. “It all comes back to Dana-Farber.”

Esther and Jon were able to balance support for their girls and their desire to give back to the Institute in their estate plans. The Zaffs wanted to create a lasting impact at Dana-Farber and make sure future generations have access to the same care and groundbreaking therapies that Esther has experienced. Her current treatment for GVHD was developed at the Institute and allows her a much more manageable dose of medications than when she first began treatment.

“Dana-Farber’s work in GVHD is life-changing research with absolutely real, positive effects on my life,” Esther said. “Those research protocols don’t fund themselves, so we want to do our part and create a legacy that will outlast us.”

Making a gift to Dana-Farber that helps change lives is as simple as placing the following language in your will: “I bequeath (a specific amount, a portion of your total or residual estate) to Dana-Farber Cancer Institute, Inc., 450 Brookline Avenue, Boston, Massachusetts 02215. Dana-Farber’s tax ID is 04-2263040.”

This story appears in the latest issue of Planning Matters, our planned giving newsletter. 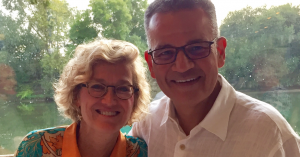