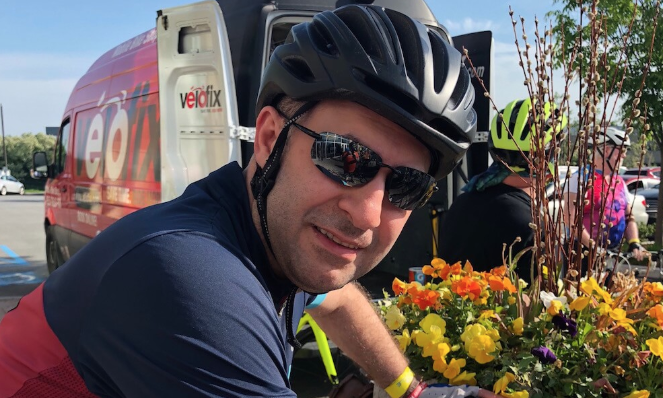 If Toni Choueiri, MD, finds his strength waning during the hilly stretches of his first Pan-Mass Challenge (PMC) bike-a-thon in August, he won’t need to look far for inspiration—just a few feet away, to fellow cyclist Rob Duffy.

A 16-year PMC veteran and leader of Team More Cowbell, Duffy directs his team’s annual fundraising totals to Choueiri, director of the Lank Center for Genitourinary Oncology at Dana-Farber Cancer Institute, and for good reason: Among those patients helped by a clinical trial developed and led by Choueiri is Duffy’s father, Ed.

“He saved my father’s life,” Duffy says of Choueiri. “My dad was diagnosed with stage IV kidney cancer in 2012, and since he got on the trial it has worked amazingly well for him. There aren’t words to describe the gratitude our family has for Dr. Choueiri.”

This passionate support goes a long way for Choueiri, who will ride in the 2018 PMC, his first bike-a-thon. Growing up in the “not very bike-friendly city of Beirut, Lebanon,” he came to cycling late; he purchased his first decent bicycle this winter, after signing up for the 39th annual PMC. He will ride 84 miles from Wellesley to Bourne on Aug. 4, one of 12 one- and two-day route options ranging from 25 to 192 miles, for the Aug. 4-5 event.

“The way I see it, I’m doing far more than just helping Dana-Farber by riding,” says Choueiri. “I’m bonding in a new way with my wife, who is supporting me; following in the footsteps of my children, who have both done the PMC Kids Rides; getting more exercise; and connecting with colleagues away from the office.”

Among such colleagues are the Lank Center’s Chris Dowd, Bradley McGregor, MD, Christopher Sweeney, MBBS, and Mary-Ellen Taplin, MD, all of whom are also riding in the PMC this year. Dowd and McGregor are joining Team More Cowbell, while Sweeney is with Team Shawmut and Taplin with Team Fat Boys and Slim Sisters.

The Pan-Mass Challenge raises more money for charity than any single athletic fundraising event in the country. In 2017 the PMC gave a record gift of $51 million to Dana-Farber for research and patient care, and this year’s event will take the PMC’s cumulative contribution since its 1980 inception well past the $600 million mark.

Choueiri says the trial that Ed Duffy started on in 2014 is a perfect example of the importance of the work led by him and Lank Center physician-scientists.

“We treated Ed with what was then an experimental therapy,” says Choueiri. “Thanks to research funding like that from the PMC, it is now a standard of care.”

Before he and any of the cyclists hit the road, Choueiri will speak at the PMC Opening Ceremonies on the night of Aug. 3. If still in need of inspiration by then, Choueiri can look to the words of Team More Cowbell’s biggest fan, Ed Duffy:

“When I first met Dr. Choueiri, everyone called him ‘Dr. Wonderful’ – and after being treated by him for over six years, I think this title is most appropriate,” says Ed Duffy. “Considering his dedication to me and his other patients, I am not surprised that he is riding in the PMC and raising money to develop new treatments for people with my type of kidney cancer. I am so proud that he will be riding alongside my son.” 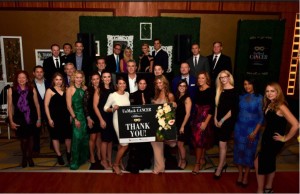 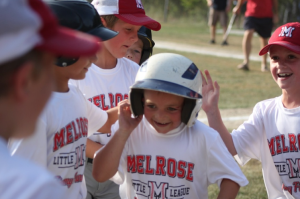