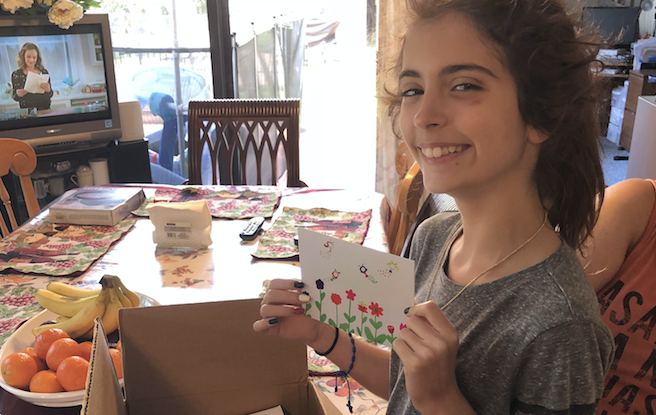 To learn more about Waffles the Bear – one of the many gift ideas in Dana-Farber’s Holiday Cards and Gifts presented by Amica Insurance –you need to know 10-year-old Alyssa Manfredonia’s story.

In 2017, Manfredonia was diagnosed with a high-grade brain tumor known as an aplastic astrocytoma. A biopsy revealed multiple mutations, including one associated with the epidermal growth factor receptor – making her eligible for a clinical trial that’s not currently available in her home state of Florida.

Her family decided to receive treatment at the Pediatric Brain Tumor Center at Dana-Farber/Boston Children’s Cancer and Blood Disorders Center and were placed under the care of Karen Wright, MD, MS. Now, every two weeks, Manfredonia and her mother, Carol, fly from Boca Raton to complete a day of treatment. It was in between these marathon treatment sessions Manfredonia discovered her artistic talent.

“Prior to coming to Dana-Faber, Alyssa was never interested in arts and crafts,” says Carol. “Now, all she does it create. It’s become her outlet.”

From painting to pottery, Manfredonia’s creations fill the family’s home. When the pint-sized Picasso learned her artwork would be featured on Waffles’  t-shirt, Carol said her daughter spent the entire day smiling ear to ear. True to her upbeat nature, Manfredonia’s design covered the cinnamon-colored bear’s purple shirt in a series of hearts.

“It was hard to contain our excitement once we saw the finished product,” Carol explains. “Here, in Boca Raton, people come up to me all of the time to say they’ve purchased a bear to support Alyssa.”

Other pieces in this year’s Holiday Cards & Gifts Collection include: an exclusive Luca + Danni anchor bracelet, a 2018 Boston Red Sox World Championship ornament, and 13 holiday cards designed by local artists and photographers. Since 2003, the collection has helped raise more than $8 million in support of cancer research and patient care at the Institute.

“It’s a festive way for people to support a worthy cause while doing their holiday shopping,” adds Larry Lucchino, Dana-Farber trustee, chairman of the Jimmy Fund and Boston Red Sox president/CEO emeritus.

For the Manfredonia family, Waffles represents hope and the kindness the family says they have received. They’re optimistic Alyssa’s design can help raise awareness and support the fight against cancer.