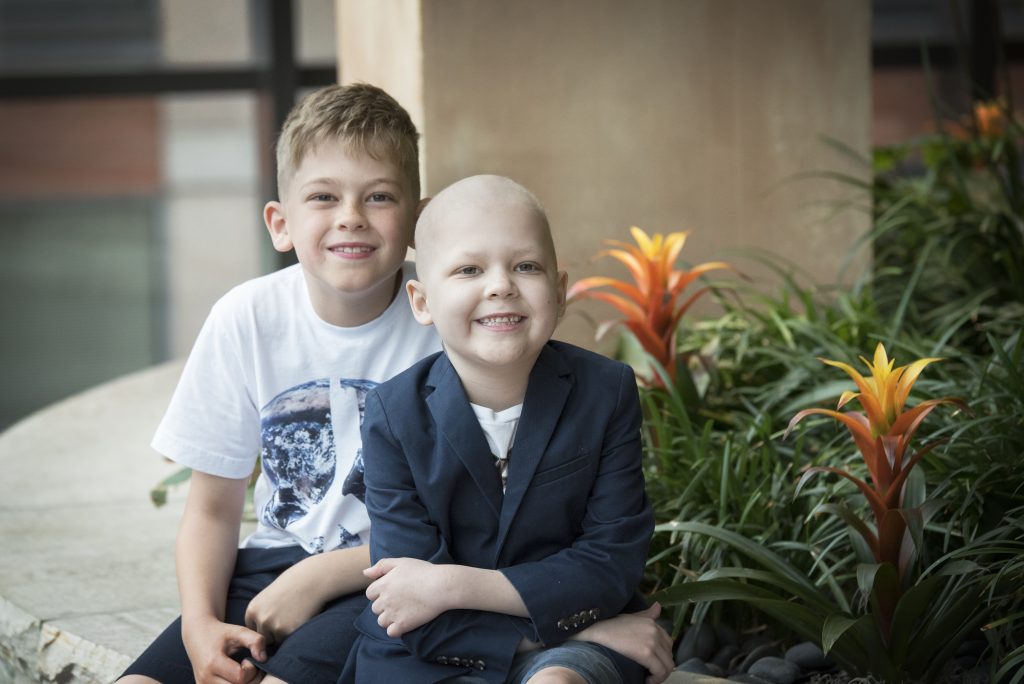 “Nixon’s probably a bigger AC/DC fan than me,” says Hamilton Clarke, 9-years-old. “I’m trying to convince him there are other bands that are good.”

But to Nixon Clarke, no one beats AC/DC. The 7-year-old, being treated for acute lymphoblastic leukemia (ALL) at Dana-Farber Cancer Institute’s Jimmy Fund Clinic in Boston, named his IV pole “Angus” and his medication port “Malcolm,” after the band’s two brothers. In addition to the Aussie rockers, Nixon’s own brother, Hamilton, and his parents have been a constant support through the nearly two years since Nixon’s diagnosis.

The close-knit Clarke family, originally from Sydney, Australia, moved to Boston in 2015 for mom Karen’s job and intended to return home within three years, but life had other plans for them.

On Thanksgiving 2017, the family was enjoying a ski trip in Stowe, Vt., when Karen noticed a strange rash on Nixon’s foot. His dad, Shaun, brought him to the local hospital to get it looked at. Following a blood test to check for infection, the family got the shock of their life—Nixon’s blood count was highly elevated; he had leukemia.

“It was nothing short of the worst day of my life,” recalls Karen. Nixon was transferred to a larger academic hospital where he received an emergency platelet infusion; after skiing all day without platelets, he was lucky to be alive. The next day, the family sped south to Boston and to Dana-Farber, where Nixon has been in treatment since.

“We come from 16,000 kilometers away, and now we live four turns from what we consider to be the best gift ever, and that’s Dana-Farber,” Karen says.

Now well into his treatment, Nixon is feeling “a lot better” and is working to make others feel better, too. He often comes to the Jimmy Fund Clinic in special outfits, including his full Brock Holt Boston Red Sox uniform. “Nixon gives back by making other people smile,” his dad says.

One thing that has kept a smile on Nixon’s face during treatment is his friendship with Jimmy Fund Captain Brock Holt, who has spent quality time with the brothers at Fenway Park, during visits to the clinic, and through video calls—and whose impression of an Australian accent always makes the boys laugh. Holt even wore batting gloves with Nixon’s name on them during the 2018 World Series.

The whole family is now dedicated to helping others access the same world-class care Nixon has received. They shared their story during the WEEI/NESN Jimmy Fund Radio-Telethon presented by Arbella Insurance Foundation in 2018 and started a team in the Boston Marathon® Jimmy Fund Walk presented by Hyundai the same year. Their Walk team included more than 60 people around the world—walkers in Boston and virtual participants adding their support from New South Wales, Australia—all dedicated to raising funds for Dana-Farber and the Jimmy Fund.

When he’s not rocking out to AC/DC or learning the guitar, Nixon is teeing off with his brother. Despite their young age, the two have played hundreds of holes of golf together, some while dressed up like their favorite players, Tiger Woods and Rickie Fowler, and it’s Nixon’s favorite activity when he’s not at the clinic. On Sept. 7, 2019, the family hosted the Team Nixon Family Golf Spectacular in Stowe, where their cancer journey began.

With the funds raised through their efforts walking and golfing, the Clarke family hopes researchers can close the disparities in outcomes for children with ALL, giving each child an equal chance of survival, no matter their family’s income level. They also hope to one day start a School of Rock, where kids with cancer can use music to help alleviate the anxiety childhood cancer can bring, and experience the joy rock ‘n’ roll has brought to Nixon during his treatment.