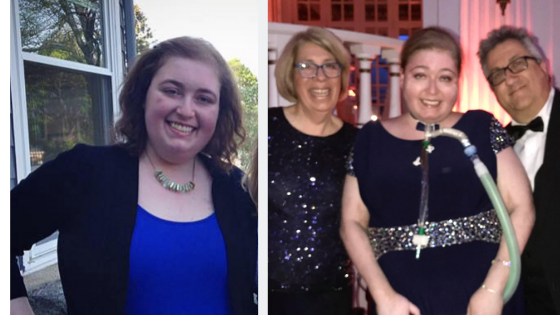 This donor story has been adapted from Alison Schnipper’s own words about her treatment and experience at Dana-Farber, which she shared in January 2019.

Amy and Phil Schnipper began their relationship with Dana-Farber in December 2009 when their then nineteen-year-old daughter, Alison, was diagnosed with acute myeloid leukemia (AML). Growing up south of Boston, Amy knew that Dana-Farber was one of the best places in the country for cancer treatment. After Alison’s diagnosis while she was studying at Ithaca College, she took a seven-hour ambulance ride to arrive at Dana-Farber to form her care plan.

Alison went into remission, but unfortunately relapsed in November of 2010, and received an allogenic bone marrow transplant (BMT) in March 2011. She relapsed again in October of the same year and received a second BMT in January 2012. At this point, her graft-versus-host disease (GvHD), a condition in which donor cells have an adverse reaction with recipient cells, became a concern. Alison became oxygen dependent in May 2015, and ventilator dependent in March 2016. She lived with severe and systemic GvHD until the end of her life in July 2019.

Through all the treatments and relapses, Alison and her parents remained grateful for the care she received at Dana-Farber. To show their appreciation, both Alison and her parents set up separate estate plans that included gifts to the Institute. Alison described a feeling of growing up with the Institute because she started her treatment during the initial construction of the Yawkey Center for Cancer Care. As the building went up around her, Alison underwent treatment, and at the same time, completed a Certificate in Paralegal Studies and graduated from Lesley University with honors.

Over time, Alison and her parents built strong bonds with her care team. Even through their grief following Alison’s passing, Amy and Phil continue to express their gratitude and plan to use Alison’s bequest gift to name a fund at Dana-Farber in her memory to support other patients affected by GvHD. Both Alison and her parents’ future legacy gifts to the Institute will make a powerful difference in the fight against cancer, while also honoring Alison’s strength of spirit. For Amy, the decision to support Dana-Farber and the Jimmy Fund was simple: “We were so impressed, pleased, and grateful to the doctors, nurses, and staff for the care that they provided Alison. We wanted to thank them, while simultaneously giving other patients and families access to the same treatment we received.”