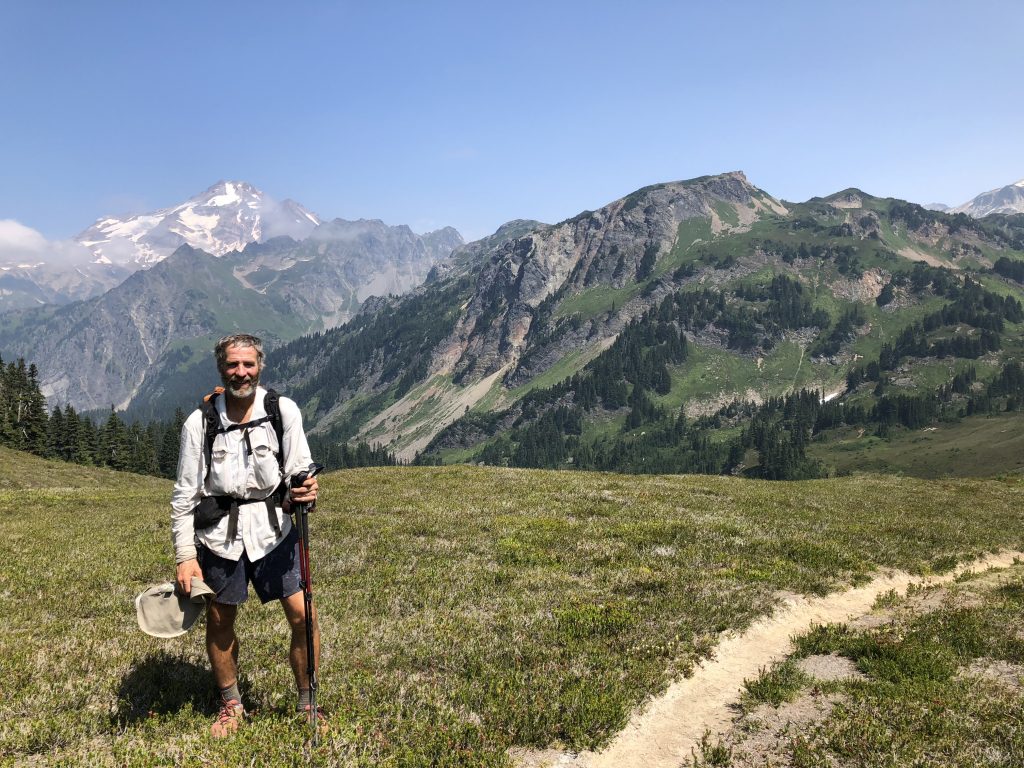 Jim “Slim” Klumpp first set his sights on the Pacific Crest Trail (PCT) in 2018, one year after his mother, Susan “Sue” Klumpp, passed away. Sue was Slim’s biggest supporter, in both his adventurous and creative pursuits. Slim’s grandparents were writers and Sue encouraged this talent in her son from an early age. After she read the journal he kept documenting his hike along the Appalachian Trail in 2014, she proudly presented him with a writing trophy that had been awarded to her mother, Frances, by the Women’s Press Club of the University of Colorado in 1924.

Sue passed away after undergoing 12 years of treatment for melanoma at Dana-Farber Cancer Institute. To honor her life and support Dana-Farber, Slim combined his passion for adventure and his gratitude for her care to create his own fundraiser, pledging $1 to Dana-Farber for each of the grueling 2,650 miles he planned to walk along the PCT.

His journey would take him across 3 states and through extreme weather conditions, but, “with the memory of mom carrying me along,” Slim stated at the outset, “I feel confident I’ll make it.”

Slim’s PCT journey began on a sunny day in April 2018 at the southern tip of Campo, Calif. Almost immediately, Slim was struck by the kindness and comradery he experienced with those he encountered on the trail, both seasoned PCT veterans and first-timers like himself. He formed lifelong bonds through the struggle and triumph of hiking through 700 miles of Southern California desert, over snow-choked passes, and through raging rivers in the High Sierra. But still, Slim’s true purpose for his adventure remained top-of-mind.

“I was thinking a lot about my mom today,” Slim wrote in his journal. “Our plan was to climb San Jacinto, a mountain my parents had climbed decades ago when they lived in Pasadena and my mom was still in good health.”

Slim recalled his father’s lamentation, nearing the end of Sue’s life, of the times she thrived in the outdoors and tackled long hikes with ease. Slim was eager to reach Oregon, where his father and younger brother would join him to hike a short section of the PCT together and memorialize his mother’s enjoyment of hiking.

Before he could reach Oregon, however, Slim had to cross Silver Pass Creek, with its series of treacherous rapids deep in the Sierra National Forest of California. “Today was easily my most traumatic day so far on the PCT,” Slim wrote. “The final crossing was just feet from the bottom of a waterfall, with the mist blasting me from the right and several large boulders to my left protecting me from being swept downstream should I fall.” Fortunately, Slim crossed safely and managed to reunite with several hikers he had been separated from several days earlier.

In early August, Slim finally joined his father and younger brother in Oregon, where they hiked five miles to Barlow Pass. In a journal entry dedicated to his father, Slim wrote, “When I thru-hiked the Appalachian Trail in 2014, you desperately wanted to join me for a short section. But due to mom’s health issues, you chose to stay by her side at home. Because, for 63 years, that’s the kind of husband you were to her. And now, at 87, you flew across the country to join me in Oregon, so we could hike a section of the PCT together. Because, for 59 years, that’s the kind of father you’ve been to me.”

After a series of harrowing struggles including shin-splints, wildfires, and unforeseen detours, Slim finally reached Canada, the end of the Pacific Crest Trail, on August 22. Slim was happy to return home, spend time with his wife and children, and reflect on the accomplishment of completing the PCT while fundraising for a cherished cause. During his journey, Slim raised $3,650 for Dana-Farber Cancer Institute and the Jimmy Fund in honor of his mother and her care team.

“The quality of the care my mother received at Dana-Farber was outstanding,” said Slim. “My family and I are particularly grateful to Drs. Berkowitz, Eswara, and Hodi for their skill and compassion. I am grateful that I can give back to the Institute and help others to benefit from the same excellent care my mom received there.”

Always an adventurer, Slim is planning his next thru-hike in 2022.