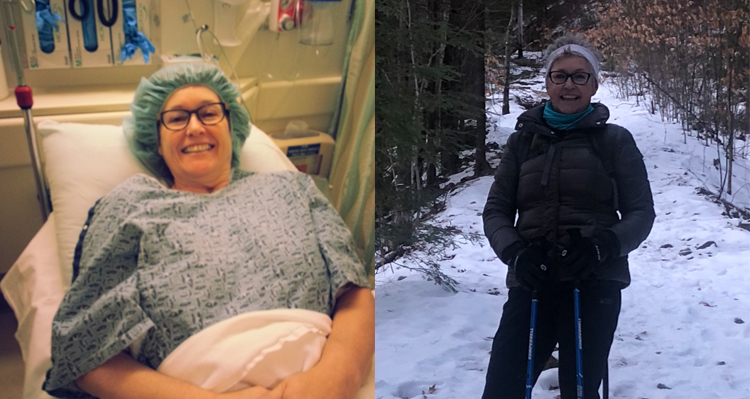 In honor of Cervical Cancer Awareness Month, Karen, a Dana-Farber patient, is sharing her story to raise awareness for the disease, which affects more than 13,000 women in the United States per year.

It all started back in August of 2013. During a dental procedure, it was discovered that my blood pressure was stroke-level high. My dentist, concerned for my well-being, halted the procedure and insisted that I see a doctor to have it checked out. I hadn’t been to a doctor for 18 years…not since my mother died from ovarian cancer.

My daughter Lauren suggested I call her doctor and two months later, in mid-October, I had my appointment. Two days later, I received a call from her and was told that I had cervical cancer. Within a week or so I had a biopsy and a pet scan done. The doctor diagnosed me with stage 2 cervical cancer with the treatment being a full radical hysterectomy. Thankfully, a dear friend of mine was able to get me an appointment at Dana-Farber.

My emotional state from mid-October until I had my first chemo on December 26, 2013 was a roller coaster ride. I saw Dr. Berkowitz, who was wonderful, patient, and responsive with emails and calls. I didn’t realize then that he, along with all the doctors I’ve since seen, wouldn’t rush into any diagnosis. They are thorough! This diagnostic stage is probably the most frustrating part. You can feel like your cancer is getting out of control and all you want is to have treatment as soon as possible.

I was afraid. Not of dying, but of what I would feel like with the daily radiation and weekly chemo. I tried to train my focus on what I needed to learn and what I was capable of learning. This method of focus would lead to many open doors, a healthier mind, and an enriched life. No other way to say it, it was hard! The treatments were daily for six weeks.

As the weeks wore on, the exhaustion and sick feeling became constant, but by the third week of February 2014, I was finished! Thank God I had the support from friends on a daily basis, and from my colleagues at the office – the six weeks of treatment became my full-time job.

2014 was a wonderful year. That May, my son Jeremy graduated from law school in Saint Paul, Minnesota, and my dear friend got married. My daughter Lauren then married her high school sweetheart in June. I was just so grateful to be a part of it all and feeling healthy. For three years I had routine checkups every six months. No scans, just pap smears and visual checkups.

All was fine until March 2017. The results of my mammogram revealed a mass in my left breast and another large mass in my lymph nodes. It took over two weeks and three labs to determine that I had metastatic cervical cancer.

I called Dr. Berkowitz and he referred me to Dr. Campos and Lisa Arvine. They brought in a surgeon and radiologist to be part of the treatment. I underwent six months of a strong dose of chemotherapy and then surgery.

My emotional state was different than before because this time I lost my hair. It started to fall out in chunks after just one chemo treatment. I had to get a wig, and that was an experience! (Word of advice on wigs, bring a dear friend and make sure you go out in the sunshine to see what it looks like!) Once the wig came in, I called my hairdresser. She came over and, in the privacy of my house, shaved my head. We both cried. I’ll never forget her act of kindness!

This treatment was a much longer process. For eight months I was, fortunately, able to work and live a fairly full life despite five-hour chemo infusions every three weeks, surgery, and then recovery. Again, I could not have done this without the help and loving support of my family and friends. If any of them see this, you know who you are, and I love you!

In January 2018, I had a pet scan, which came back clear. I was elated! That March I started dating a man. Not more than a month later, I had another pet scan, which showed two lesions in the liver. I met with my team, Dr. Campos and Lisa Arvine. After an MRI, they referred me to a radiologist who opted for an ablation to get rid of the lesions instead of surgery.

The night before the ablation, my daughter and her husband arranged for the three of us to stay at the Boston Harbor Hotel. We had drinks outside the hotel and listened to jazz music before heading over to the North End for dinner and cappuccinos. We ended the evening at St. Andrews Church to pray for a successful procedure. It was a magical evening that I’ll always cherish! The procedure seemed like it was a success. I started on a maintenance chemo in July and went down to Boston every three weeks for blood work and treatment. The chemo was tolerated, and I lived a full and vibrant life.

In December of 2018, a pet scan showed the lesions were back. I’m so grateful to Dr. Campos for having my tissue examined. I tested positive for PD-L1, which means my immune system doesn’t recognize cancer cells. That January I started immunotherapy treatments with a drug called pembrolizumab (otherwise known as Keytruda). I was on that until July 2019, when I had a pet scan and an MRI, and they showed another mass. This time it was in the pancreas. It was thought I had pancreatic cancer. Flash forward after several MRIs, a CAT scan, two biopsies, a chemo treatment, and multiple hospital visits, I was put on a strong dose of steroids. Within a few weeks the mass was gone.

This marks one of my darkest times as there was a lot of fear around the possibilities of this being pancreatic cancer and so many unanswered questions. If this was cancer, what type? Would I survive it? If not cancer, then what caused this? Was it the immunotherapy drug? Still to this day, no one knows. At the present time, I’ve had a couple months off from treatment and I am doing my best to make the most of it. My attitude remains positive. Dr. Campos is always prepared, thinking one step ahead. I trust her and I trust her team.

It is without hesitation that I say Dana-Farber has some amazing doctors, nurses, and staff that go to great lengths to care for you. Despite the distance between my beloved children and grandchildren who all reside in Minnesota, I remain in New England to be near my doctors, family, and friends. I wouldn’t go to any other facility for care.

I’m grateful that Dana-Farber and the Jimmy Fund are bringing awareness to this disease. I’m now such an advocate for yearly screenings. If you are diagnosed, know that Dana-Farber has the research and doctors to care for you!