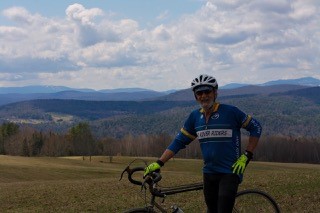 Donald “Don” Wexler has participated in every Pan-Mass Challenge (PMC) since 1983. Alongside lifelong friend and PMC founder Billy Starr, Don has witnessed the power of riding and fundraising in fueling the explosion of breakthrough research and new treatments at Dana-Farber Cancer Insitute over the last four decades.

So when Don was diagnosed with acinar cell carcinoma (ACC), a rare subtype of pancreatic cancer on April 1, 2015, and told that he may have only 12–18 months to live, Don knew exactly where he needed to go if he were to beat the odds: Dana-Farber.

When Don was diagnosed, researchers at Dana-Farber had just opened a study to evaluate inherited and tumor gene mutations across the entire genome in patients with pancreatic cancer. Don enrolled in the study and learned that he had inherited a mutated BRCA2 gene that likely contributed to his development of pancreatic cancer. The good news: this specific alteration is associated with positive responses to Don’s chemotherapy regimen. But now Don had something else to worry about—his family’s potential for inherited cancer risk.

Don’s family immediately sought out genetic testing, and one of his daughters, Chloe, also tested positive for the BRCA2 mutation. Chloe now has regular appointments in Dana-Farber’s Cancer Genetics and Prevention Clinic, where she is screened to ensure that if she does develop cancer, it is caught at the earliest, most treatable stage.

In addition to treating Don with a chemotherapy regimen more likely to be effective in patients with BRCA mutations, Don’s oncologist, Brian Wolpin, MD, MPH, director of the Gastrointestinal Cancer Center at Dana-Farber, worked with Don to develop synchronized chemotherapy and PMC training schedules so that he could maintain his normal routine. With Dr. Wolpin’s warning, “Just don’t fall,” in mind, Don hopped on the back seat of a tandem bike for his first training ride since starting treatment, joined by three friends from his PMC team, Erica’s Entourage. Though they took a spill while rounding the first corner, Don would not quit. After transitioning back to his solo bike, Don rode a total of 3,000 miles in 2016—his first year as a “Living Proof” rider in the PMC and just one year following his diagnosis.

As Don continued riding and receiving treatments, his scans began to show his tumors shrinking significantly, earning Don the designation, “exceptional responder.” Because of his remarkable response to treatment and the nature of his rare subtype of pancreatic cancer, Don was eligible to have his tumor metastasis ablated from his liver in 2015, and was spared a more invasive surgery. After more chemotherapy, Don was eligible for Whipple surgery, in which part of his pancreas was removed, including all cancerous tissue. Don has remained cancer-free ever since.

“Treating cancer is a team effort and involves numerous people at Dana-Farber working closely with a patient and their family,” reflected Dr. Wolpin, who is also director of the Hale Family Research Center and the Robert T. and Judith B. Hale Chair in Pancreatic Cancer. “It is because of this partnership and team approach that we all have had the immense pleasure of seeing Don thrive during and after his treatment.”

Don’s wife and daughters have joined him in the PMC on team Erica’s Entourage, and in recognition of Don’s exceptional care, the team began allocating half of their dollars raised to Dr. Wolpin’s research. To date, they have raised more than $7 million for Dana-Farber, including $2 million for pancreatic cancer, which has helped Dr. Wolpin’s team make important advances in research and care, including:

“This progress is a result of the seed we planted with our fundraising,” said Don. “It truly gives me chills. Our fundraising has changed things in just five years. We aren’t stopping until we have eradicated this disease.”

Just as he has tackled the PMC course for more than 40 years, Don looks forward to tackling any obstacles that lie ahead as he works to improve the lives of cancer patients—not surprising for someone who is, in a word, exceptional.