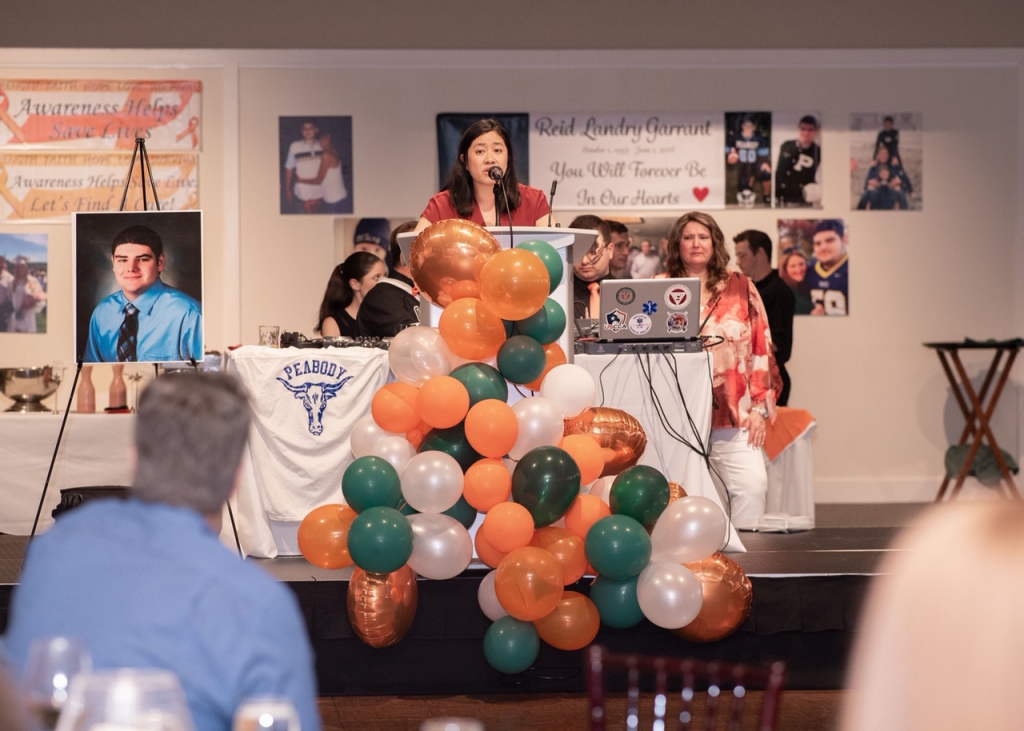 Anyone who knew Reid Garrant never expected that anything could stand in his way. At 6’3” and just over 300 lbs, the 22-year-old athlete was dubbed a ‘Gentle Giant’ by friends and loved ones: sweet, affable, with strength to spare.

When he became ill in late May of 2018, his family thought it was just the flu. He had been feeling sick for a few days and had bruises on his legs. Though bruises were nothing out of the ordinary—he held a part-time job with his uncle’s landscaping company and was a bouncer in a Boston club.

It was only when Reid collapsed in his bedroom that his mother, Paula, realized something was seriously wrong. She took Reid to Brigham and Women’s Hospital in Boston, where he was seen by a team of doctors including Dana-Farber’s Jacqueline Garcia, MD, who specializes in leukemia. Paula, a licensed social worker who works primarily with patient families, completed her internship at Dana-Farber in 2007, and now found her world coming full circle in the most devastating way.

In a matter of hours, Reid was diagnosed with acute promyelocytic leukemia (APML/APL), a rare form of cancer in which cells in the bone marrow that produce blood cells do not develop and function normally. Tragically, Reid passed away in the early morning of June 1, only 18 hours after he collapsed at home.

“I asked the doctors how long my son would have had this, and they told me only about two weeks,” said Paula. “Two weeks? How can I save my child in that amount of time? It’s not enough time.”

Honoring Reid
In the wake of Reid’s tragic passing, Paula has dedicated her life to honoring her son by supporting cancer patients and their families. She found solace in bereavement groups led by Sue Morris, PsyD, at Dana-Farber, and was inspired to start the Reid Landry Garrant Foundation to spread awareness about APML/APL and raise money for patient assistance programs.

“Not everyone has money to balance paying for treatments and keeping up with mortgages, light bills, car payments, food,” said Paula. “Families struggle with finances during treatments. I knew that from witnessing it firsthand as a social worker.”

Inspired by her training at Dana-Farber, Paula’s foundation supports the pediatric and adult patient assistance funds at Dana-Farber, under the direction of Joe Chabot, MS, and Deborah Toffler, MSW, LCSW. Above all, her gratitude for Dana-Farber and compassion for Dana-Farber patients and families has been a key driver of her fundraising and advocacy.

“Dana-Farber was important to me during my training, and it’s even more important to me now,” said Paula. “I told Reid that we were at the best hospital in the world, that we had the best doctors helping him. And I meant it.”

Adapting to a virtual world
The Garrant family’s ability to adapt to difficult, unexpected situations has carried them through the COVID-19 pandemic, when they had to cancel the 2nd Annual Reid’s Night of Giving in June. The event is

held on the anniversary of Reid’s passing, celebrating his life through an evening of dinner, music, raffles, and a silent auction, with half of the proceeds donated to support patient assistance at Dana-Farber. This year, Paula quickly pivoted to online fundraising, employing her friends and family to start Facebook fundraisers in support of a virtual Reid’s Night of Giving.

“The pandemic meant we had to cancel, but leukemia is still here,” said Paula. “Dana-Farber is full of people getting treatments who need our help, and we will be there to help however we can.