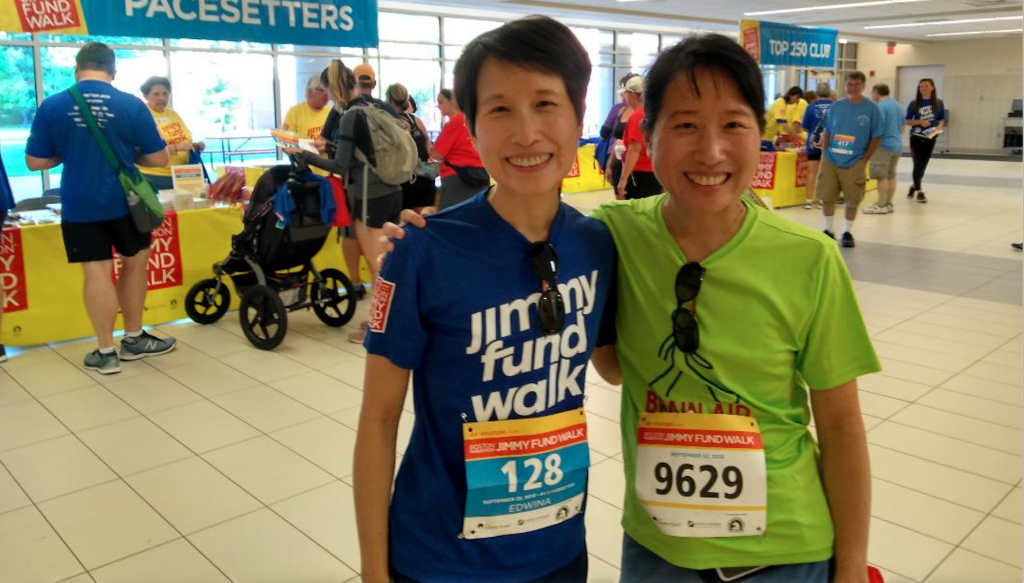 When Edwina Li was diagnosed with lung cancer in 2015, she became determined to give back to her community, setting her sights on the Boston Marathon® Jimmy Fund Walk as a meaningful way to do so. Having lived in Massachusetts since 2000, Edwina had heard of the Jimmy Fund Walk and knew several people who had participated in it before. So with their encouragement and her now personal connection to the cause, she signed up for the event.

Margaret Li, Edwina’s sister, was one of many people supporting her efforts that year. With plans made to cheer Edwina on later as she crossed the finish line at Boston’s Copley Square, Margaret dropped her off at the event’s start line. Although Margaret had come that morning just to see her sister off, as they explored the Walk’s starting area together, the excitement there changed her plans for the day:

“Experiencing all the energy, listening to all the motivating speeches, and seeing the sheer number of committed walkers, each with their own story, was really captivating,” said Margaret. “It wasn’t long until I realized it was going to be pretty impossible for me to get back to the car—and I did not even want to, after experiencing all the anticipation and energy!”

Since then, the Li sisters, both of Hingham, Mass., have walked together each fall. They are inspired by their desire to support the scientists, doctors, and nurses who research new therapies and cures for the disease. Edwina and Margaret agree that the number of people they know affected by cancer, along with their motivation to make a difference, keeps them coming back year after year.

In 2019, the Li sisters’ connection to the cause deepened even further when their older sister, Andrea, passed away after a 14-month battle with liver cancer. Andrea’s aggressive disease came out of nowhere, just as Edwina’s lung cancer had.  Andrea’s courageous battle and subsequent loss left the family deeply heartbroken.

“Andrea was so successful at juggling many different roles at the same time,” the sisters remembered.  “She was a model for what we wanted our lives to look like: a happy, loving marriage, a young family with three toddlers, tenured professorship with her own lab, working with and influencing so many students and colleagues. Her life was brimming and full of possibilities—never did any of us think it would all end so suddenly and so tragically.”

Edwina and Margaret said the tragic loss of their sister reaffirmed their commitment to helping end the disease.  “Andrea was always about supporting science and research, as she herself was involved in research science,” Margaret shared. “Her 14 months were incredibly difficult for everyone, and we experienced first-hand the limits of medicine, science, limits to clinical trials, transplants, limits to access and approvals to treatments, the stronghold of insurance companies, the difficult conversations that had to happen, all while knowing that time was not on our side. So many heart-wrenching experiences only further confirm why it is so important to be a part of the Jimmy Fund, to be a part of the move towards finding a cure, a better understanding, and management of this disease in all its forms.”

This year, as the Walk goes virtual for the first time, the Li sisters are excited to walk for their sixth year. With their eyes set on someday walking the Jimmy Fund Walk’s full marathon route, Edwina and Margaret are using this year’s Your Way route flexibility to stretch 26.2 miles over the course of a few days.

As they gear up for this year’s Walk on October 4, their advice to prospective walkers is simple: “Just do it!”

Register today for the virtual Jimmy Fund Walk: Your Way on October 4. Participants will walk in their own communities, all for the shared goal on conquering cancer.