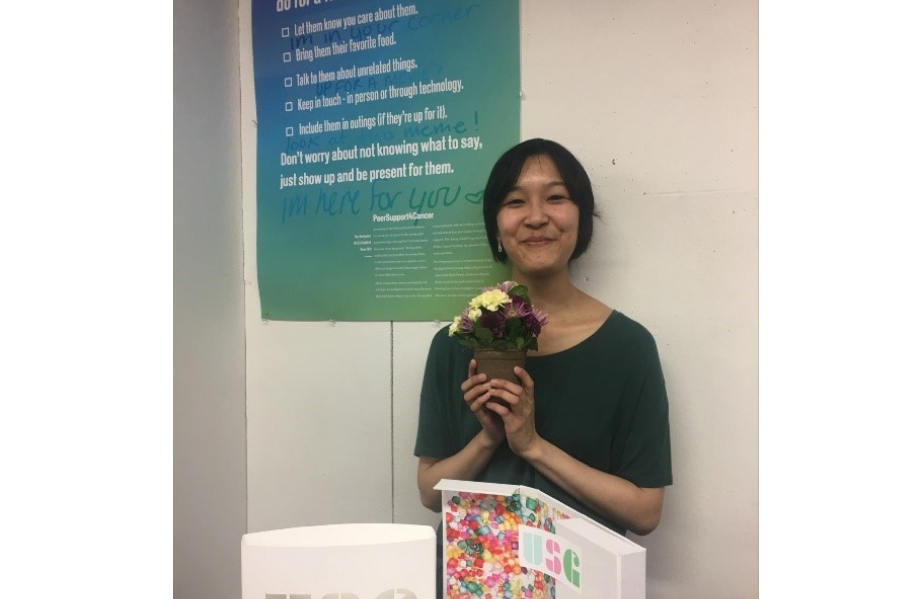 As any mother would, Linda Darbyshire always thought the world of her incredible daughter, Amy. Linda and her husband, Jack, adopted Amy from China when she was just 6 months old. Only a few short weeks after arriving in China to meet their newborn, Linda and Jack lost their Cape Cod home in a fire. With the help of their colleagues at the local hospital and VNA clinic, Linda and Jack were greeted with a rental and nursery prepared for their arrival. Linda could have never imagined then the journey that was to come for her daughter and ovarian cancer.

A lifelong lover of art, Amy was thrilled to start her tenure as a student at the Massachusetts College of Art in 2014. Known for always being found pencil and sketch pad in hand, Amy let her imagine run wild when bringing her creations to life—until 2017, when excruciating pain led to emergency surgery. Amy was shockingly diagnosed with small cell carcinoma of the ovary, hypercalcemic type (SCCOHT), a highly aggressive form of ovarian cancer with an average survival rate of just two years. With such a rare type of cancer, Amy and Linda were directed to Dr. Panos Konstantinopoulous at the Susan F. Smith Center for Women’s Cancers at Dana-Farber Cancer Institute.

“I was so impressed from the first time we met with Dr. K,” said Linda. “He came in to that first appointment having done research with colleagues at Dana-Farber and other cancer hospitals around the country and had a wealth of knowledge about Amy’s condition.”

Although Amy decided to take medical leave for one year, she returned to MassArt in her relentless pursuit to obtain her Bachelor of Fine Arts while simultaneously receiving treatment with Dr. Konstantinopolous, making it a point to treat herself to lunch at the Lavine Family Dining Pavilion daily.

With the persistent disease showing little response to Amy’s stem cell transfer, Dr. Konstantinopoulous turned to timely research from the Smith Center and partnering organizations to provide Amy with groundbreaking treatments just in the nick of time.

“Several times when we thought we had reached a dead end in terms of treatment options, new research saved the day,” said Linda, crediting the collaboration between Amy’s team at the Smith Center at Dana-Farber, Brigham and Women’s Hospital, and Beth Israel for her world-class care. “I was so amazed to see how Amy had a whole team who always communicated with each other before communicating with us.”

After four surgeries, six rounds of chemo, a stem cell transfer, two rounds of radiation, immunotherapy, chemotherapy with a PDK4/6 Inhibitor, one stubborn tumor remained. Through radiation, another five-hour-long surgery, and cryoablation, Amy has shown no evidence of disease since February.

“Amy had an amazing response to therapy,” said Dr. Konstantinopoulous. “She is a true inspiration for all of us.”

Today, while continuing a gradual recovery, Amy is a happy graduate of MassArt with aspirations to become a graphic designer. She continues to use her graphic design skills to actively work as volunteer with the Brewster Ponds Coalition, a nonprofit environmental group on Cape Cod.

“Amy has been incredibly resilient and has met every obstacle with poise and grace,” Linda says. “She has a remarkable understanding of everything that’s happening, and we have learned to follow her lead.”

Feeling gratitude for the place that saved her daughter’s life, Linda agreed to share their story at Revolutionary Developments in Women’s Cancers, a virtual program in September 2020 hosted by the Executive Council of the Susan F. Smith Center for Women’s Cancers at Dana-Farber. More than 460 women came together virtually to hear the stories of patients like Amy and families like Linda’s.

Uniting many of the world’s leading experts in breast cancer, gynecologic cancer, and genetics under one common goal, the Susan F. Smith Center works to give patients the latest, most advanced care, including innovative therapies that are often available only through clinical trials.