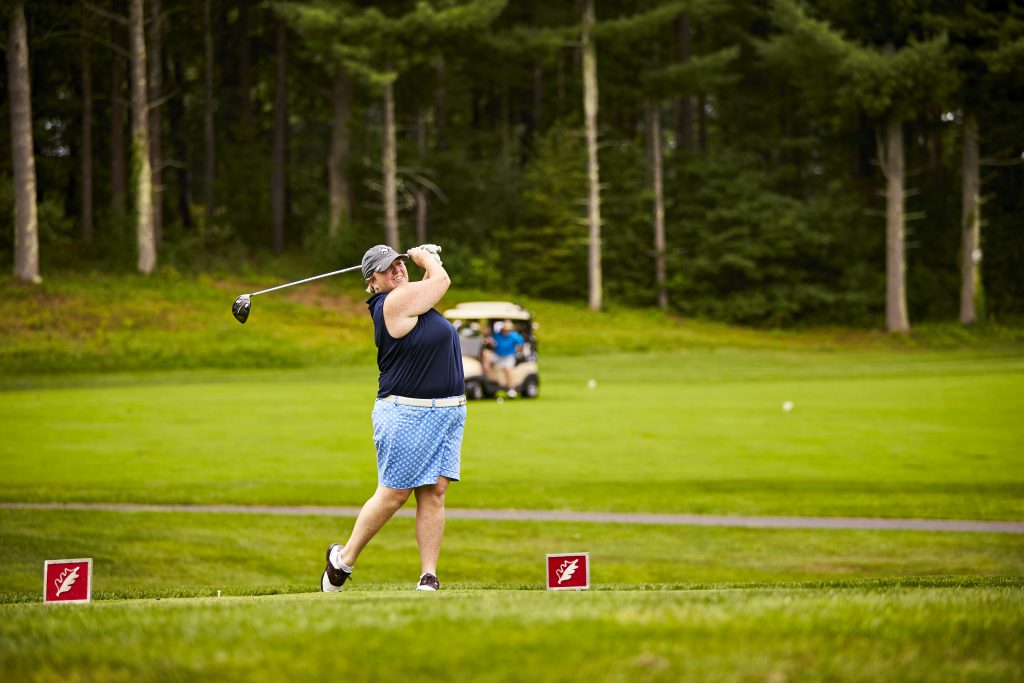 Since a young age, golf has been a constant companion in Cathy Burgess’ life. The Andover, Mass., native played competitively with her mother, even winning a Massachusetts mother-daughter tournament, before going on to captain the women’s golf team at Boston College. It was a core part of her life until 2012, when abdominal pain and a series of major surgeries all but sidelined her from the sport she loved.

After years of pain and misdiagnoses, Burgess was diagnosed with stage III ovarian cancer in 2017. “It was frightening,” she says, remembering her mother’s experience with cancer 18 years prior. “What I saw her go through was horrific, and I was so scared. I figured dying was probably easier.” But when Burgess met Ursula Matulonis, MD, chief of Gynecologic Oncology in Dana-Farber’s Susan F. Smith Center for Women’s Cancers, soon after being referred for a second opinion, her mind was immediately put at ease.

“At a time when I felt very out of control of my life, it was reassuring to be in such capable, confident hands,” says Burgess, who remarked on the warmth and acceptance of Matulonis and her team. “If anyone has to go through cancer, the best place to do it is Dana-Farber, no question.”

Burgess had surgery to remove her tumor and six months of additional chemotherapy to control the spread of her cancer. But for the once active Burgess, it was not an easy road to recovery.

“It took me six to eight months to get my energy back,” she says. One thing that helped motivate her in her recovery? Participating in a Jimmy Fund Golf event.

Burgess was asked to speak about her experience as a Dana-Farber patient at the 2018 Sunrise to Sunset Jimmy Fund Golf Tournament, a one-day, 36-hole golf fundraiser for the Jimmy Fund. As she prepared to share her story, she thought about the powerful message illustrated by the golfers in that room: By committing to raise funds for the Jimmy Fund, they were helping to save patients they had never met before, like her. In that moment, before taking the stage, Burgess decided to make a promise to herself and to everyone there: She would be back to play in the 2019 event. If these golfers could battle cancer or support their loved ones being treated and still come play, so could she. Burgess’ remarks and promise earned a standing ovation, but soon afterward the reality of her words set in: After two years of being sick, could she regain her physical strength for what she knew would be a daunting task?

“I knew I had to get myself back together, and Sunrise to Sunset was really a turning point for me,” Burgess recalls. She started small in training for the 2019 event, by walking on a treadmill, then outdoor walks before hitting the driving range with her partner, Diane, who picked up golf at the same time. “I had to get myself in shape mentally and physically to play two really tough courses over a long day.”

When the day finally came, Burgess wasn’t alone on the course. Her foursome consisted of another survivor, who had lost his leg during treatment, and two others playing in memory of loved ones.

“We went out as strangers and finished as family—it was truly a unique experience,” Burgess remembers. “You could see how excited everyone was that we were helping each other get better and find the strength inside ourselves. And it was so self-satisfying, to know that I could get back out there and conquer 36 holes of golf.”

“Cancer is an ever-changing illness and it can happen to anyone. Dana-Farber and the Jimmy Fund have the best people in the world working on solutions, so cancer doesn’t become a death sentence, but something we learn to manage. You can have an impact just by sharing your story and showing up to play, wherever you are.”

Support Dana-Farber patients like Cathy by making a donation to the Jimmy Fund Golf Challenge. Make a gift before November 15, 2020, and you could win a year’s supply of Callaway golf balls!