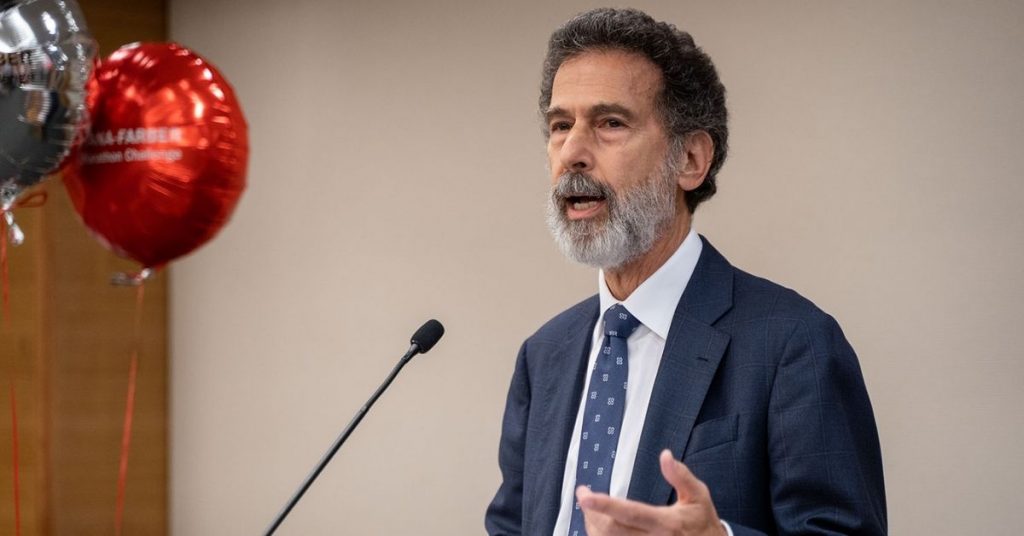 Barrett Rollins, MD, PhD, started working at Dana-Farber Cancer Institute in 1983 and hasn’t left since. After joining the staff in 1989, Dr. Rollins became the Institute’s first Chief Scientific Officer in 2004, marking a pinnacle point in his career as well as in Dana-Farber’s history. “It was the best job I could’ve ever imagined. My task was to make it easier for my colleagues to do science, and that was really fun to be a part of,” Dr. Rollins says.

Now transitioning into retirement, Dr. Rollins has spent his career researching white blood cell trafficking and the interactions between inflammation and cancer. Outside of his work and CSO role, he has also invested his time and energy into Dana-Farber’s philanthropic world, taking part in the Dana-Farber Marathon Challenge (DFMC) team in the Boston Marathon® as a runner and fundraising for more than two decades in support of the Claudia Adams Barr Program for Innovative Basic Cancer Research.

“The amazing thing about the Claudia Adams Barr Program is it fills a niche that no other program does,” he says. “From a fundraising point of view, we get great satisfaction from putting together a program that is the result of gifts from all over, tens of millions of dollars, that add up.”

Dr. Rollins cites Dipanjan Chowdhury, PhD, as a Barr Program beneficiary doing groundbreaking work. Chowdhury is currently working on a blood test to detect a class of RNAs, single-strand molecules vital to a body’s genetic programming, which may lead to early detection of ovarian cancer, a disease that is infamously difficult to detect early.

“Dr. Chowdhury began his research by looking at mechanisms of DNA damage and DNA repair,” Dr. Rollins explains. “He then worked to discover a class of RNAs that present themselves in ovarian cancer. He realized that if you have a sensitive way to look in the bloodstream to see if these RNAs are present, you might be able to detect ovarian cancer earlier.” It’s moments in research such as these that are fueled by funding from the DFMC team, which has now cumulatively raised more than $100 million since the team began in 1990.

“All of the high-impact, new therapies in cancer happening now began from a basic science observation that grew out of pure curiosity,” Dr. Rollins says. “The way to think about basic science is it’s the innovation-driver that creates something that impacts patient’s lives.” Dr. Rollins has the first-hand experience of seeing what a fundraising dollar can do at Dana-Farber, and from being on the fundraising side as well, he knows how difficult, yet rewarding, both science and fundraising can be.

Dr. Rollins recalls how his DFMC team members were some of the most selfless and mission-driven individuals he’s ever met. The experience of running the Boston Marathon® for the DFMC team would be impossible without the Boston Athletic Association (B.A.A.) and its dedication to charities when considering race entries. For that, runners like Dr. Rollins are forever grateful.

“There’s a great deal of purity to the Boston Marathon that aligns with the purity and purpose of the DFMC team,” he says, “And for the B.A.A. to have that purity and purpose, too, it really feels like it’s the right partnership.”

“Cancer research is a marathon. You can have little victories along the way, and when you finally have a research result that’s really gratifying, it comes at the end of a lot of preparation, work, disappointment, and sweat,” Dr. Rollins explains. “Getting that result is like crossing the finish line.”

To learn more about the DFMC team, please visit RunDFMC.org.