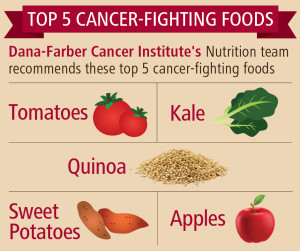 In honor of National Nutrition Month® we sat down with Dana-Farber Nutritionist, Stacy Kennedy, MPH, RD, CSO, LDN, to discuss nutrient-rich foods with cancer-fighting properties. Kennedy, as well as the nutrition team at Dana-Farber Cancer Institute, strongly supports a diet rich in plant-based foods and believes it’s one of the best ways to help prevent cancer. “It really is an excellent choice for everyone,” says Kennedy. “The key is color. That is where the phytonutrients, or cancer-fighting properties, can be found. They help protect the produce and can also be beneficial for humans by supporting the immune system.”

We asked Kennedy to share her top 5 cancer-fighting foods and the science behind each one. Here’s what she had to say:

1. Kale
“Kale is one of my go-to choices because it’s rich in many phytonutrients like carotenoid-based antioxidants and other sulfur-based compounds including indoles, which support natural liver detoxification processes and may help protect against DNA damage or inhibit tumor blood vessel formation,” says Kennedy. Other members of the cruciferous family include broccoli, cauliflower, arugula, cabbage and Brussels sprouts. Kennedy points out that people who have diets rich in these vegetables have been found to have lower incidences of certain cancers like lung, prostate cancer and stomach cancer.

2. Tomatoes
“Tomatoes are a great food because they are rich in a phytonutrient called lycopene, which has been associated with a reduced risk of prostate cancer,” explains Kennedy. The lycopene is best absorbed when the tomato is cooked and includes a healthy fat like olive oil or avocado, packing more of a nutritional punch.

3. Sweet Potatoes
Sweet potatoes and yams, which are actually not the same vegetable, are other foods that can be enjoyed year round. They are rich in phytonutrients called carotenoids, such as beta- and alpha-carotenes. “Including even small but consistent amounts of carotenoid-rich foods may help reduce the risk of breast cancer, lung cancer, and ovarian cancer,” says Kennedy. Other foods rich in carotenoids include carrots, acorn or butternut squash, and pumpkin.

Kennedy reminds that phytonutrients like carotenoids are available in pill form but warns that they do not have the same protective properties as those found in whole foods and may even cause harm in certain individuals. To get the healthiest boost, Kennedy says it is best to eat the food versus taking these nutrients in a pill.

4. Apples
Studies suggest that eating at least one apple a day may help reduce the risk of developing certain cancers like throat, mouth, colon, lung, and breast. Besides being delicious, apples contain fiber, Vitamin C and quercetin, another antioxidant-based nutrient. “Since apples are on the EWG’s Dirty Dozen Plus list, try to choose local and organic when possible and eat them with the skin on,” says Kennedy. “That’s where many of the nutrients are found.”

5. Quinoa
Quinoa (keen-wah) is a great source of protein. It’s naturally gluten-free and often called an ancient grain because it’s been grown for thousands of years. Quinoa is actually a seed that can be ground into flour. It is considered a complete protein, which means that it contains all nine essential amino acids, just like meat. Quinoa is also rich in fiber and minerals like iron, magnesium and calcium plus phytonutrients like quercitin, an antioxidant that we just learned is also found in the skin of apples.

Quinoa is a nice alternative to protein-rich foods like meat and fish. Other alternatives include lentils, beans, nuts, seeds, and other whole grains.

For recipes that include cancer-fighting foods like the ones above, check out Dana-Farber’s free nutrition app Ask the Nutritionist: Recipes For Fighting Cancer.

The PROMISE Study’s impact on early detection of multiple myeloma

Tips for lowering your cancer risk