“If it were not for Dana-Farber, my daughter would not be here,” says Erika of her 9-year-old daughter, Marlin.

In October 2017, Marlin experienced sudden and extreme hip pain – her first symptom of cancer. She had recurring and disappearing pains in her knees, shoulder, elbow, and wrist. After a month of multiple emergency department visits and no answers, Marlin was diagnosed with acute lymphoblastic leukemia (ALL).

“Being told that your child has cancer is one of the last things you want to hear. It takes the air out of your lungs. It’s like trying to put your seatbelt on after the rollercoaster ride has already started,” Erika says.

Marlin is currently halfway through a two-year chemotherapy plan. She celebrated her 9th birthday in the hospital, which was a hard experience for both Erika and Marlin.

“We kept watching other kids who were being discharged, and she wanted so badly to be going home, too. Telling her that she had to stay was awful. Then, one day, it was her turn to leave. Since then, she will sometimes say, ‘I’m the happiest kid on the planet…well, except for a kid who’s getting out of the hospital today.’ This experience has given us a new perspective,” continues Erika.

Erika and Marlin see first-hand how donations made to Dana-Farber and the Jimmy Fund impact the lives of cancer patients.

“Years ago, my daughter’s cancer was a death sentence. Today we have a real chance.

I have a chance to watch her go to prom, graduate from high school, grow her wings, and fly. Many parents before me didn’t have that luxury. Our gift of hope exists because of all those who have contributed to support Dana-Farber’s mission,” says Erika.

This holiday season, give hope to patients like Marlin and mothers like Erika. Together, we can conquer cancer. Donate here. Thank you. 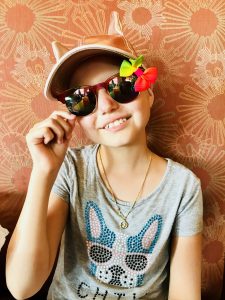 Sisters Walk Together Against Cancer

Life as a medical interpreter during the COVID-19 crisis